You are here: Home > Knowledge Base > Basics of Web Hosting > Windows vs Linux Web Hosting 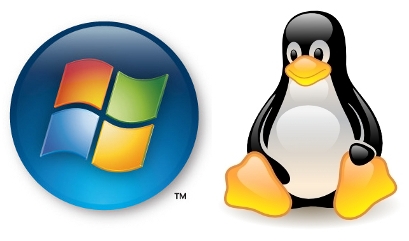 Linux and Windows are the two major Web hosting operating systems. Traditionally Linux was the first operating system to be used in Web hosting but Windows is catching on quickly. Both operating systems have their pros and cons and as you have probably guessed, in some cases one of them is the better choice, and in other cases it is just the opposite.

The choice between Linux hosting and Windows hosting is strongly affected by personal preferences of the one making the choice. Linux and Windows are two major operating systems - one of them (Linux) is open source, while the other (Windows) doesn't share its source code with the world. Both camps have their supporters and to some extent it is true to say that the discussion if Windows or Linux web hosting is better is a "religious" debate about open source vs proprietary software in general. In a sense, the dispute Windows vs Linux web hosting is like the brunettes versus blondes dispute - both contenders have pros and cons and it is largely a matter of personal preferences.

Anyway, in order to help you make an informed decision about Linux and Windows web hosting, we'll try to summarize some of the main points to have in mind before you make the decision:

Are you confused regarding which one that is the better choice? Don't be - there is no clear answer to this question! Actually, in most cases it doesn't matter if you choose Windows or Linux as your web hosting platform - what matters more is that you choose a reliable provider with little or no downtime, good bandwidth, and affordable (which doesn't necessarily mean low) prices. If your applications/technologies don't force you to choose Linux or Windows, whatever you pick, is a good choice!