You are here: Home > Knowledge Base > Industry Insights > Web Hosting Trends in 2015

Web Hosting Trends You Should Watch in 2015

It’s the time of the year when experts and laypeople alike make forecasts on how the rest of the year would go, and we’re no different. We’ve done this in the past and, to continue that annual tradition, we now peer into our crystal ball and cast our own bold predictions for 2015. 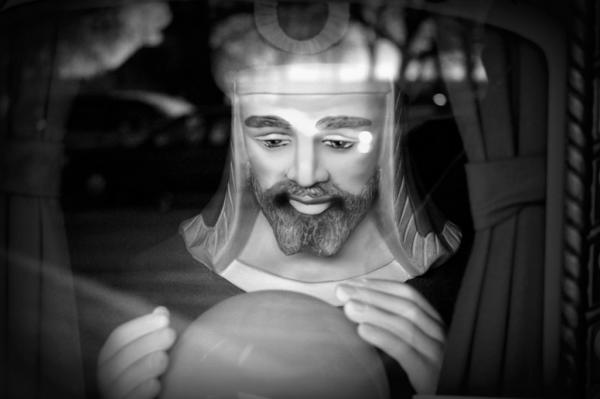 But first, let’s take a quick look back at some of last year’s most noteworthy events in the web hosting and IT world that helped shape the things to come:

Let us now turn to our prognostications. Here are the key hosting trends this year that every website owner must know about:

This one’s a no-brainer. Ever since ICANN allowed the creation of new gTLDs last year, we knew it would change how we use the web forever. We’re no longer confined to 22 domain extensions or will be forced to come up with bizarre, misspelled “Web 2.0” names because relevant .COMs are increasingly scarce. There are now thousands of possible domain name configurations, and this has big repercussions on business and professional branding, internet marketing (particularly SEO), and how people search and browse online.

As of December 2014, there were over 3.5 million registrations of new gTLDs. As more gTLDs are released throughout 2015, we can expect this number to grow. TLD Watch is optimistic that the number of registrations might reach 10 million by the end of the year. 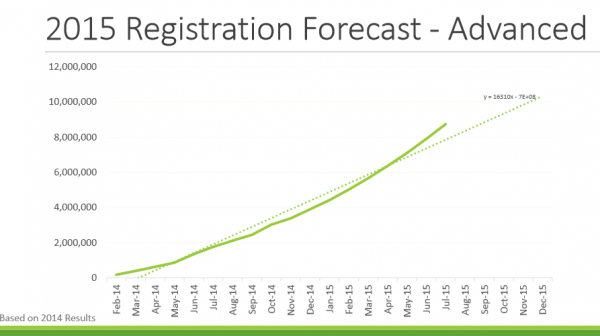 This year, we'll also see more people using services like Squarespace, Weebly, and Wix, which offer all-in-one subscription-based packages that include both their website publishing software and a hosting plan. It also helps that Google, a major player in the cloud hosting market, opted not to bundle web hosting with its new domain registration services, and instead partnered up with these easy site building services.

Squarespace is one service provider to watch. While separate publishing platforms such as WordPress, Drupal, and Joomla still dominate the market, it's hard to ignore the growing percentage of websites using Squarespace, as this historical trend graph from W3Techs shows: 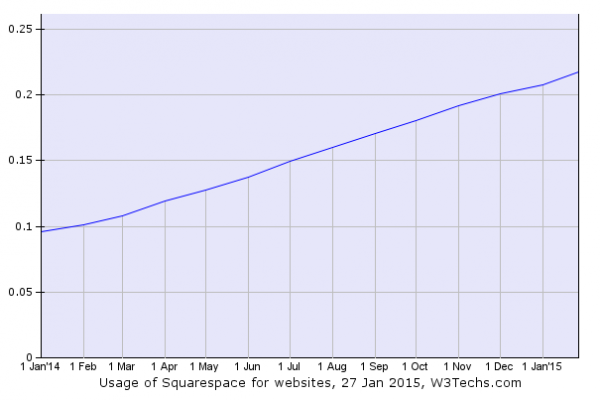 Squarespace's growing number of users is no surprise given the additional $40-million funding they received last year, their latest software update, and their aggressive marketing campaigns – which include a Super Bowl ad.

As businesses and general users become more aware of services like Squarespace, the more they will see them as a compelling alternative to self-hosted sites, which might be better left to users with more technical knowhow or resources.

There’s room for both kinds of users, however. There’s no shortage of traditional web hosting providers, and as well see in the next item, cloud hosting is also increasingly becoming practical and popular.

This year will see greater adoption of cloud hosting. For large companies, it will be a de facto requirement, as the cloud will be the only viable solution for containing the enormous amounts of data they have and for providing the computing power they need. Experts speak of a “cloud migration” that they expect to happen for real this year.

The most recent Future of Cloud Computing survey found that 63 percent of organizations already use the cloud for their web presence. Apart from websites, other business functions such as communication, revenue generation, and product development are also finding their way to the cloud, with 94 percent of organizations already running cloud-based applications or are experimenting with it.

The cloud is not solely the realm of enterprise users, however. Startups and small businesses are beginning to see the advantages of hosting their site and data in the cloud, as it helps them scale quickly and have redundant backups at less cost.

It helps that intense competition among industry giants AWS, Microsoft, and Google are driving prices down. They are joined by smaller but no less innovative companies like DigitalOcean, Centrilogic, and OVH, which boast their own approach to cloud services. DigitalOcean in particular saw meteoric rise in the past two years as a top cloud hosting provider, whose low-priced model appeals to small businesses, developers, and tech enthusiasts.

We’ve been hearing about the Internet of Things (IoT) for a while now. A world of interconnected everyday objects that could intelligently interact with each other and with human beings seems to be the stuff of science fiction, but it’s slowly becoming a reality. Big companies like Intel, GE, Cisco Systems, and dozens of technology and manufacturing firms are pushing for its development.

Research firm Gartner, Inc. has estimated that the IoT would comprise 26 billion units installed and generating more than $300 billion in incremental revenue for product and services suppliers by 2020.

At present, the Internet is mostly people-driven, meaning data is created, accessed, and moved about by human users. We connect through the Internet using our computers, phones, and other Internet-enabled “smart” devices. In the IoT, anything could do that, and they’d be everywhere: furniture, appliances, clothing, cars, electric grids, factory equipment, and anything that can be embedded with sensors and programmed for autonomy would continuously communicate feedback and be remote-controlled over the Internet.

As a result, the data generated and bandwidth needed would be immense, more than data centers could currently handle and process. This challenges data centers to rethink its approaches to security, enterprise needs, consumer privacy, data management, storage, server technologies, and data center networks, according to Gartner.

Flexible and scalable cloud technologies are best suited to meet the demands of IoT. IDC, another tech research firm, predicts: “Within the next five years, more than 90% of all IoT data will be hosted on service provider platforms as cloud computing reduces the complexity of supporting IoT ‘Data Blending’”.

Web hosting providers are taking significant steps to keep up. Forward-looking companies like Codero are now offering custom hybrid cloud hosting, which combines traditional dedicated hosting with the cloud platform to achieve optimal results. This is a good solution for businesses that want the benefits of being in the cloud with the solid performance and security of dedicated, on-premises hosting.

In the short term, average individual users may not immediately flock to the cloud and a brisk market for shared hosting will remain. For sure, though, change is afoot.

Security breaches at big companies or governments make big news, as we’ve seen last year.  But cybersecurity isn't just a problem for high-profile institutions. Let’s consider website hacking alone: according to Sophos Labs, 30,000 websites are hacked per day, with majority of these being small business websites.

Website hacks are especially common among sites that use content management systems (CMS) like WordPress, which 61 percent of websites use. According to a report from WP White Security, 41 percent of hacked WordPress sites were hacked through a vulnerability in the web host (rather than security issues from their theme (29%) or their plugins (22%). To be fair, other CMS like Joomla or Drupal are also targets; WordPress just makes for a good target because of its widespread use.

These notorious hacking incidents and the vulnerabilities of most websites naturally lead to website owners demanding tighter security from their web hosts. Hosting companies will hopefully respond to this increasing demand by promising better security and, more importantly, delivering on that promise.

If you own a website or plan to have one, it's essential to keep an eye on the latest news in the website hosting industry, even if you're not a technical person. You don't have to understand all the nitty-gritty details, but it's best to be familiar with the latest technology and trends that are relevant to your website's accessibility and security.

There’s one service that you completely rely on: your website host. Their reliability, speed, and customer service helps keep your site secure and running. Now that you're up to speed with the latest website hosting trends, you can tell if your host keeps their technology updated or if there are any risks you should be aware of.

As the saying goes, forewarned is forearmed.