You are here: Home > Knowledge Base > Industry Insights > The Future is Here Now: The Internet of Things

The Future is Here Now: The Internet of Things

The Internet changed the way we live, and it’s about to undergo a massive transformation that is nothing short of revolutionary. Enter the Internet of Things (IoT). 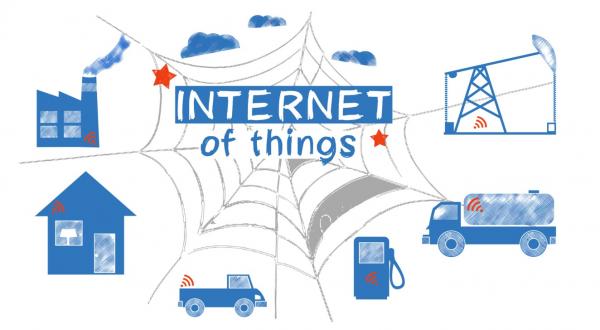 “There were 13 billion Internet-connected devices in 2013, according to Cisco, and there will be 50 billion in 2020,” Patrick Tucker, author of The Naked Future: What Happens in a World that Anticipates Your Every Move, writes about the exponential growth of technology. And he’s not just talking about laptops, tablets, and mobile phones. “These will include chips, sensors, implants, and devices which we have not yet conceived.”

The IoT is about this multitude of sensors and devices being connected to each other, intelligently interacting with their environment and sharing data with each other with little intervention from human beings. We are so used to using devices like our phones and computers as a way to connect to the Internet; in IoT, anything that can be fitted with a unique identifier and a sensor can automatically collect data and transmit feedback over the network.

Home furniture and appliances, for example, can be programmed to smartly interact with human beings and assist in making everyday decisions, such as whether to bring an umbrella or to order milk because supplies are running low. IoT seems like a concept out of a science fiction movie. But it’s slowly becoming a reality.

Intel IoT -- What Does The Internet of Things Mean?

IoT – Good or Bad? The Experts Weigh In

Last year, to mark the World Wide Web’s 25th anniversary, the Pew Research Center conducted a study entitled The Internet of Things Will Thrive by 2025. They asked more than a thousand technology builders and analysts’ about the Internet of Things and what it means for us in the not-so-distant future: “As billions of devices, artefacts, and accessories are networked, will the Internet of things have widespread and beneficial effects on the everyday lives of the public by 2025?”

Out of the 1,606 respondents, 83% answered “yes” and the remaining 17% answered “no”. When asked to elaborate on their answers, six overlapping themes surfaced:

1) Growth of IoT and Wearable Computing

We’ve already developed wearable accessories like optical head-mounted displays and smartwatches that integrate computers into our clothing. More and more objects will be accessible by the Internet. With the IoT, devices are able to communicate and perform automated actions for us. It would likely improve efficiency and convenience, but according to the survey minority, it’s not a life-changing advancement. If anything, IoT just seems like the next fad and these devices just toys for the wealthy, mere symbols of exclusivity and social status.

2) Rise of Privacy Issues Due To Widespread Data Collection

The rise of IoT implies that there will be widespread sensors and actuators to simplify actions and processes. Everyday activities will be monitored to harvest information to build profiles and create segmentation. It can bring convenience as well as violations against privacy. Without privacy, there are even higher risks of isolation and misanthropy due to cases of cyberbullying, identity-theft, and espionage.

3) Advance in Information Interfaces like Touch and Voice Commands

A brain-computer interface is unlikely to be achieved by 2025. However, respondents believe that we will see progress with more complex voice and gesture recognition. These efforts are towards the hope of assimilating human movements into commands for devices.

Once the IoT covers more ground, respondents fear that it will become too complicated and difficult to sustain. Machines and apps on the IoT will be built on good intentions but can be vulnerable to bugs and hackers. People are outraged over websites going down; imagine if a bank or hospital system suffers technical difficulties.

As the Internet becomes a necessary utility like water or electricity, people with no access will be left out. A connection will be a prerequisite to establishments like school or work. This does not only alienate individuals who choose not to be connected, but also entire developing nations that will not be able to. Respondents fear that this will only widen the digital gap.

The Internet has made the world smaller. However, it has also created a preference of being online rather than present. We already see how people are hunched over their laptops and tablets, foregoing conversation with their nearby companions. The IoT will usher in new ways to socialize, revamping the concept of personal space by spreading it worldwide and compressing it into just a phone screen.

With the Internet of Things looming in the horizon, companies already have begun investing and securing their share of the billion-dollar empire. Businesses have forged coalitions like the Open Interconnect Consortium (formed by Samsung, Intel, Dell, Atmel, and Broadcom) and the AllSeen Alliance (Haier, LG Electronics, Panasonic, Qualcomm, Sharp, Technicolor, Silicon Image and TP-LINK) to allow their members to set standards which all IoT-connecting products must adhere to.

Small businesses also stand to benefit from IoT. Microsoft, which provides the Azure IoT services platform, is optimistic that the new technology will boost productivity, efficiency and sales of SMBs. “IoT offers an opportunity to gather insights like never before, and we believe it will help small businesses get away from just running a business to finding ways to make it thrive,” says Thomas Neergaard Hansen, VP of Worldwide SMB at Microsoft.

What is the Internet but a gigantic mine of confidential information? Without proper security, the IoT becomes a vast landscape of opportunity for cyber criminals. The Economist reported that in 2013, “more than 800M digital records, such as credit- and debit-card details, were pinched or lost, more than three times as many as in 2012.” In order to be secure, several authentications will be imposed, “there will be more passwords and more updates, though that may make the Internet of things less easy to use—a blow for a business based on making life more convenient”.

The proliferation of connected devices exchanging enormous amounts of data at phenomenal speeds presents both a huge opportunity and challenge for web hosting providers.

Gartner has predicted that the IoT will comprise 26 billion units by 2020. Imagine the amount of data these would generate. Data centers, web hosts, and ancillary third-party services need to significantly improve their real-time workload and processing capabilities.

The industry is reaching what Rachel Chalmers, head of Infrastructure Computing for the Enterprise (ICE) for 451 Research, called the “inflection point.” At the Hosting and Cloud Transformation Summit in 2012 in Las Vegas, she said: “There’s an inflection point coming that will dramatically raise the stakes and rewards… Every single (enterprise) is in the process of redefining themselves as an information company. We believe hosting and managed services providers stand to be the main beneficiaries of this trend.”