The core benefit to a CMS is that it makes web development more efficient and productive. A CMS is particularly helpful in scenarios where a lone webmaster manages an entire site. The core difficulty with these technologies is choosing the right platform. There are many diverse options, and they’re all constantly evolving. In order to give you a head start, we provide this look at the twenty best web-oriented content management systems for 2012:

WordPress has humble origins as a PHP-based blogging platform, but it has since developed into one of the most powerful and feature-rich CMSs available. WordPress is free and open source, and it boasts a massive and diverse community. That robust community is the driving force behind achieving the great potential of WordPress’s extensive template and plug-in architecture.

Joomla is a free and open-source CMS, and it distinguishes itself with a wide array of sophisticated functionality. Early on, WordPress was clearly the more user-friendly platform, but Joomla has closed that gap considerably, and through a layered approach, it’s now one of the easiest and most intuitive systems to use. Joomla also has more than 3,000 extensions, and it’s particularly rewarding to developers who invest the time in achieving an intermediate and greater skill level.

Drupal is a free, open-source CMS and content management framework (CMF). Drupal is extensive and advanced, and like WordPress, it has a huge and active community. Technically, Drupal is more of a pure CMS than either WordPress or Joomla, which are both blog-centric. However, it does have blog features, such as profiles, user blogs, forums and support for OpenID, but it isn’t as blog-friendly out of the box.

For this list, we focused chiefly on non-hosted, non-remote CMS solutions, but Adobe’s Business Catalyst is an exception. What sets Business Catalyst apart is how aware it is of visitors and customers. As an e-commerce solution, this is simply the most sophisticated feature set available, and it has data-mining functionality that you can’t find elsewhere. The downside is that it’s a bit rigid, and updates come slower than they do with an open system.

At one point, Movable Type (MT) was in the discussion with WordPress, but MT eventually faded in popularity due to its cost and license. Modern MT is free and open source, and it has slowly made a comeback. It’s a powerful blog-centric CMS, and it has a community that nearly rivals that of WordPress. MT is a solid alternative to WordPress, and it’s worthwhile to perform a live comparison of the two.

Magento is an e-commerce-centric CMS. It’s available as a deployed or hosted solution, and there’s a free, open-source version as well as a premium, licensed edition. The most powerful aspect of Magento is the ability to start with the free version and then graduate to the premium edition when traffic and sales call for that type of performance and support. The Magento community is robust and thriving, and that distinguishes it from many other licensed solutions.

CMS Made Simple, which has a recursive acronym, is free for personal and commercial use, and it’s extremely easy to use and learn. This system is not nearly as comprehensive and feature-rich as WordPress, Joomla or Drupal, but it’s an excellent alternative for small websites. A new user can install CMS Made Simple, and have a complete website or blog up and running in a few minutes or less. 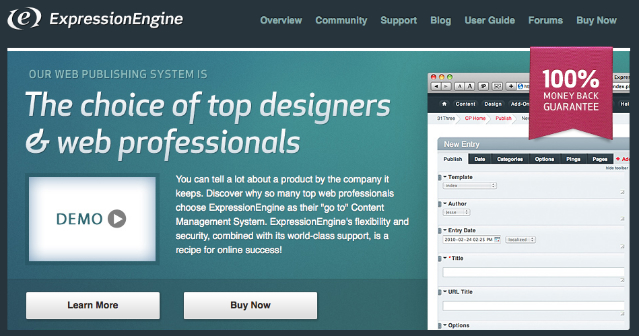 ExpressionEngine (EE) is one of the most elegant and flexible CMS solutions. From the ground up, the developers have designed it to be customizable and extensible, and it’s very intuitive and user-friendly. It’s robust directly out of the box, and for developers, it has a sophisticated template engine, including built-in versioning, custom global variables and custom queries. EE also boasts tag, template and query caching, which helps the most template-intensive EE sites stay fast and responsive.

Concrete5 is an open-source CMS that is deployable or hosted, and it distinguishes itself with a focus on inline editing. In other words, every piece of content and every UI element on a concrete5 website is editable in place. This very powerful approach to web editing allows the developers to build the site through the eyes of the visitors. Concrete5 is not as advanced as WordPress, Joomla and Drupal, but that lack of complexity makes it much more usable in some scenarios. 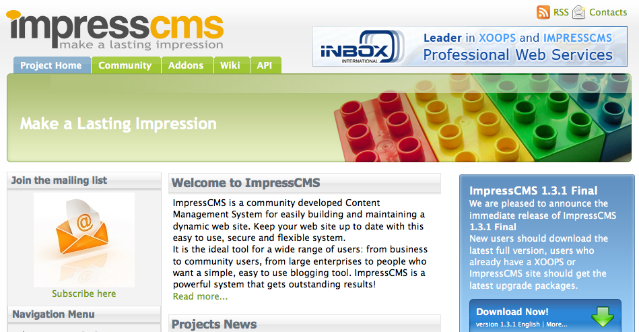 ImpressCMS is a relatively new option and it was born when the XOOPS team divided. XOOPS didn’t make our list, but it gets an honorable mention. ImpressCMS, on the other hand, makes the list due to the ImpressCMS Persistable Framework (IPF). The IPF allows for rapid development of modules, and it lets those modules to have advanced feature sets. This has allowed ImpressCMS to catch up with WordPress in terms of plug-ins, which is something most CMSs struggle to do. 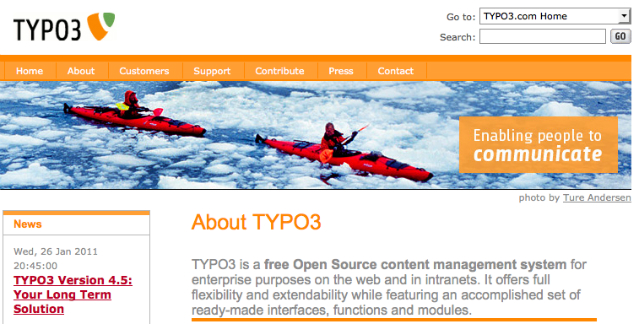 TYPO3 is a free, open-source CMS that uses the GNU license. TYPO3 is fast, sophisticated, extensible and customizable. The defining aspect of TYPO3, however, is its support for a wide range of platforms. It also provides a great deal of interoperability between its platform-distinct versions. Currently, TYPO3 supports Apache or IIS running on Windows, Mac OS X, Linux, FreeBSD and OS/2.

Textpattern is a free open-source cross-platform CMS. It has a reputation as a top blogging tool, but it’s also a powerful general-purpose CMS solution, and it’s deployable over a wide range of contexts. Compared to WordPress, the advantage of Textpattern is that it has a more robust article system, and it’s a bit more flexible for custom solutions. The downside is that it has a much steeper learning curve.

The e107 CMS is a portal-centric, as opposed to blog-centric, platform. This style of CMS has fallen out of a favor to a degree, but for portal-type sites, e107 is an excellent solution. It’s also quite capable of producing websites that focus on blogs, forums and news, and it manages to distinguish itself through built-in automation as well as custom automation via scripting.

SilverStripe is a free open-source CMS, which uses the BSD license, that has a wide range of built-in sophisticated features, including a WYSIWYG editor. One of SilverStripe’s best features is the extensible and customizable application interface. Most CMS interfaces provide access to features you’ll never use and lack access to features you’ll use all the time. SilverStripe, on the other hand, lets the developer build the administration panel so that it’s perfectly suited to that website. 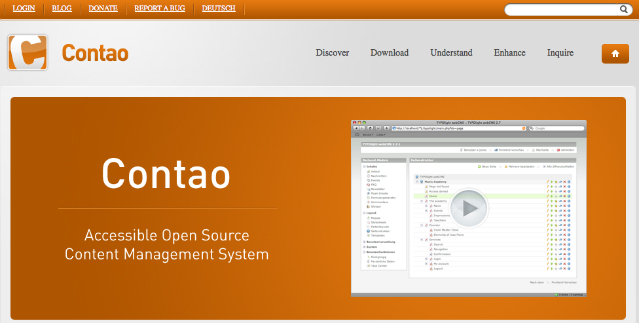 TYPOlight was the free, open-source version of TYPO before TYPO became free and open source. When that happened, TYPOlight evolved into its own standalone project: Contao. In many ways, Contao is similar to WordPress, and it’s a viable alternative. Compared to WordPress, the main benefit of Contao is that it has a lot more integration of advanced modules right of the box, so getting an advanced website up and running is a little bit easier with Contao.

Wolf CMS is a free cross-platform CMS, and a fork of the Frog CMS project, which is a PHP port of the Ruby-based Radiant CMS. Frog CMS didn’t make our list, but Radiant CMS does at #19. Wolf CMS is a strong alternative to WordPress, and it has a large, thriving community. It also distinguishes itself through its high-quality integrated plug-ins. Many of these plug-ins, such as the archive, file manager, comments system and statistics mechanism, are much more advanced than are available for the other CMSs.

Pligg CMS distinguishes itself by specializing in creating social publishing networks. These networks, like Digg, Mixx and Reddit, allow users to submit and promote content. These sites tend to not to display their own content, but rather display the best of the Web in an organic way. Pligg is the first CMS to take this approach to content management. It’s not nearly as sophisticated as the top options, but it shows a great deal of promise.

Plone is a relatively new CMS, and unlike most of the PHP-based options in this list, it uses Python and the Zope application server. Plone is perhaps the only CMS that has intranets as its core focus. It’s an awesome option for internal solutions, and used by many governments, corporations and universities. Plone is also a full-featured web solution. It boats powerful security, workflow management, automation, time-based publishing, inline editing, versioning, wiki support and more. 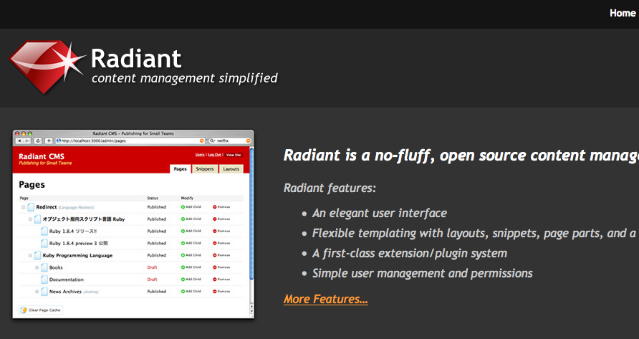 Using the MIT license, Radiant CMS is free Ruby-based CMS. Radiant CMS distinguishes itself from other CMSs, including Wolf CMS, by having a very small core. The goal here is to be able to build a CMS piece by piece specifically for the needs of a particular website. This approach is very powerful and versatile. It also demands much more effort, and designing basic sites can take much longer in Radiant than it would in WordPress, Joomla or Drupal.

Cushy CMS uses a similar approach to CMS Made Simple and concrete5, and in its default configuration, it requires no installation or programming. The reason we rank Cushy so much lower than its comparable is that it’s much less accessible. If simplicity is the key, then CMS Made Simple does it nearly as well without cost. If hosting is the key, concrete5 provides that as well as inline editing at less cost. Cushy is a great blend of the two, but the professional version, which allows branding, can cost more than $25 per month.