You are here: Home > Knowledge Base > Web Design and Programming > The Ultimate RSS Toolbox

RSS which stands for Really Simple Syndication has turned out to be the protocol of choice for distributing and sharing content on the internet across multiple platforms and browsers. RSS feeds are the best way to keep all your subscriptions in one place and also to add to your subscriptions list quickly and easily.

For those of you who have just started out, the content on any website that you see (Blogs and general websites) can be written into a standard format which can then be read by RSS readers which are programs (Browser plugins, desktop readers etc) and presented to you in a standard format.

Here is an extensive list of popular and cool RSS toolboxes/readers that are freely available. 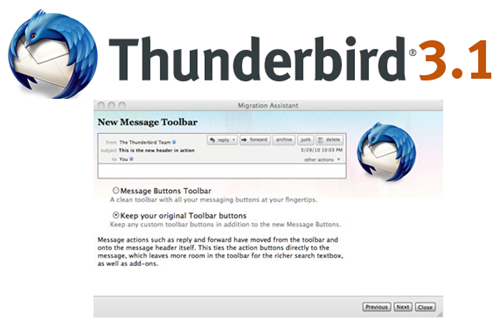 Thunderbird has to be ultimate Windows based RSS reader with a Microsoft Outlook like desktop client interface. You can not only use Thunderbird to read RSS feeds but it's also an email client. How about replacing your Outlook, a paid product, with Thunderbird? It comes from Mozilla, the developers of the awesome Firefox browser. 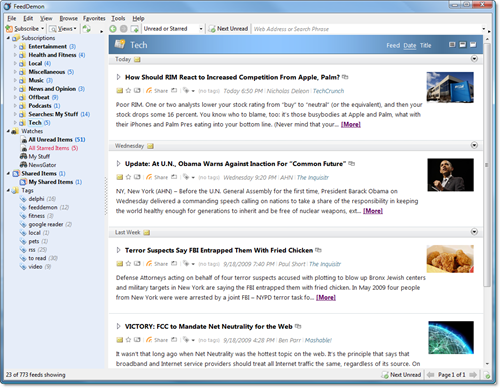 FeedDemon has to be Newsgator's masterpiece. With an easy to use UI and impressive design, you can add new RSS subscriptions, read RSS entries, tag and categorize them. Hard to beat. 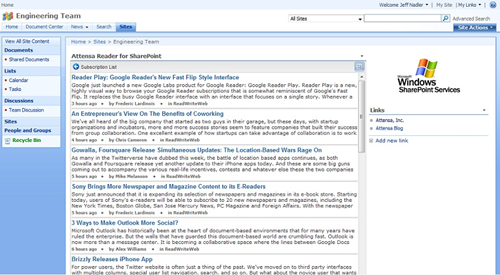 Attensa is a plug-in for Microsoft Outlook and it integrates nicely with OPML support as well. Besides being an RSS reader, it can also parse and display information from MS SharePoint and Wikis. It requires a .NET platform running, which is included in Windows so you do not need to install it separately. 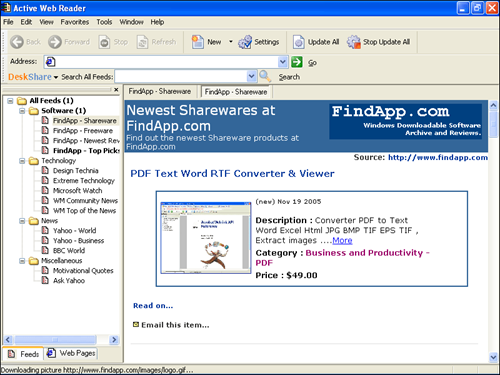 DeskShare has extensive support for various RSS formats but you have to pay a price to use it. Besides standard features like tagging and categorization, you can also apply custom themes and use it to sniff feed links when you're browsing a page which makes adding new subscriptions easier. DeskShare promotes using Internet Explorer for some reason. 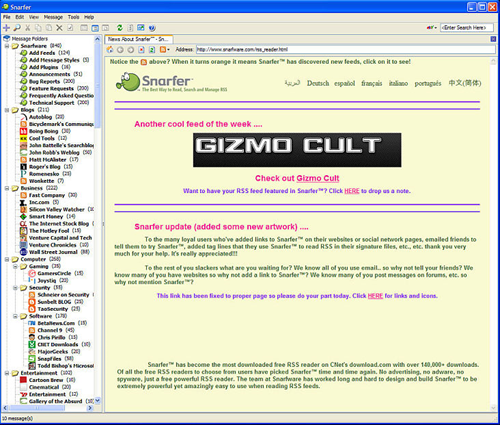 Snarfer is yet another Windows based RSS reader and feed organizer but one feature that sets it apart is it's speed. Besides organizing and reading your RSS feeds, you can also search eBay and Craigslist with ease. 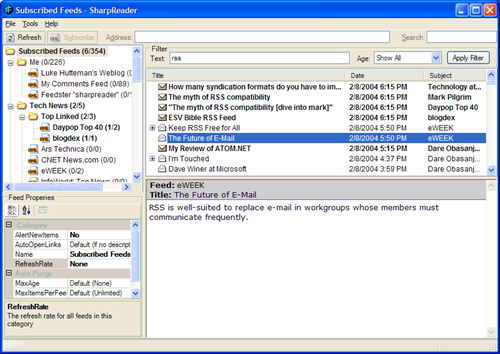 SharpReader requires a .NET framework version 1.1SP or higher which means it's primarily targeted at developers. ShardReader has been included in PC World's "Best of the Web" list. 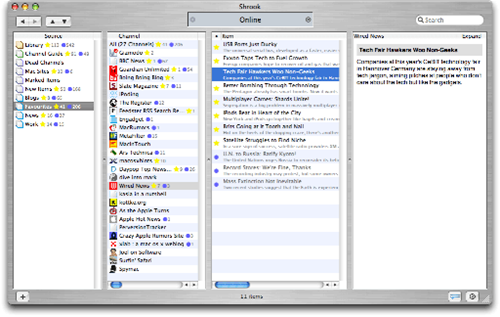 Shrook is a free Mac OS X based RSS reader. It does not require any additional framework and does not show any advertising or spam. It requires Mac OS X v10.4 or higher. 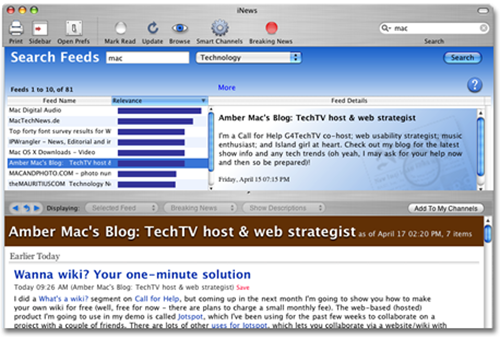 With Pixelated you can organize your RSS subscriptions into Smart Channels. It supports extensive searching into your RSS database which is really convenient for searching on tags. It also displays breaking news separately but does not explain how it filters this. 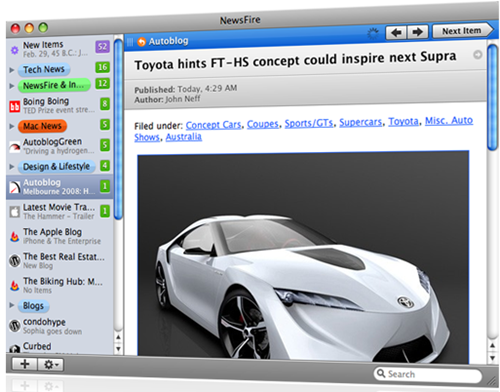 This is an awesome OS X based RSS reader. The UI is simply amazing, just as slick as Apple's own apps. It has all the standard features and requires Mac OS X Snow Leopard. 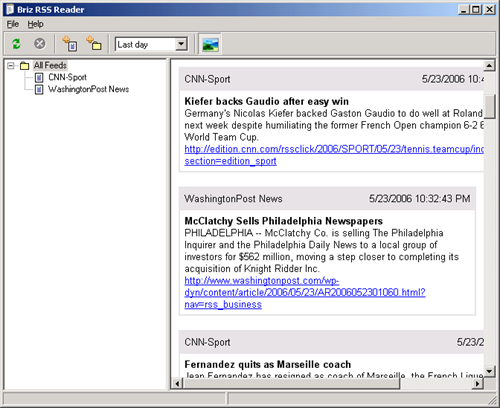 Briz is an alright Windows based RSS reader with all the standard features but nothing too exciting. If you have Windows XP or an older OS, you might want to try it out. Not recommended for Windows Vista or Windows 7. 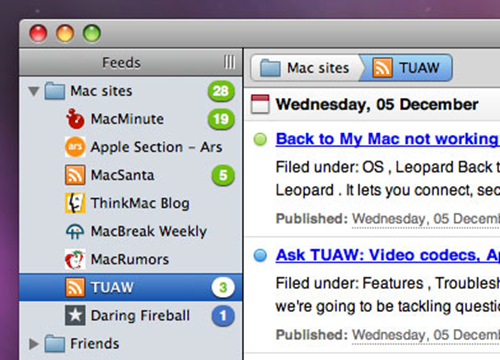 NewsLife is an awesome OS X based RSS client but it does cost money. It is desktop based but once you click a feed it opens the browser for displaying the article's page. It requires Mac OS X 10.4.11 or later.

Straw is a Linux based RSS reader. Besides standard features like hooking up new RSS feeds, reading and organizing, it has support for OPML and Atom protocols as well. It also syncs entire feeds so that you can read them even when you are not connected. Since it's Open Source, you can also contribute to it. 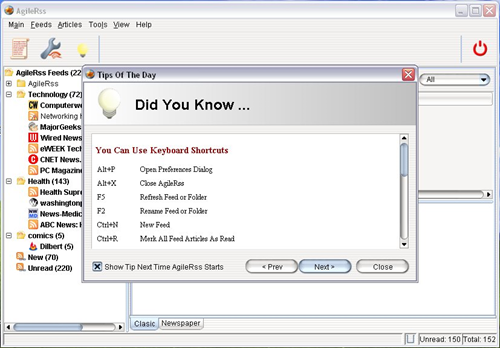 AgileRSS is yet another Linux based RSS reader with support of reading RSS, ATOM and XML feed types. It has a healthy features list included and it cutely calls the RSS items 'Tickers'. 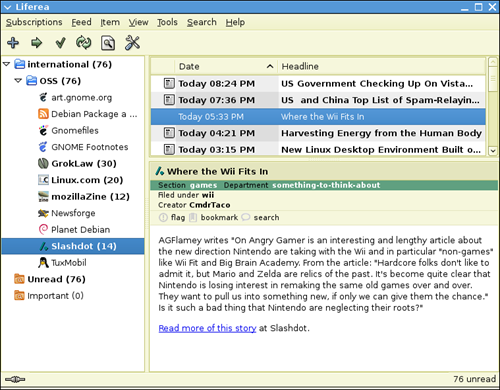 Liferea stands for Linux Feed Reader and it is a nice, simple and easy to use RSS aggregator. It connects with Google reader and also has Webkit rendering support which means all Webkit based web browsers can access it's content. It's also Open Source.

The most popular browser based RSS readers and toolboxes. 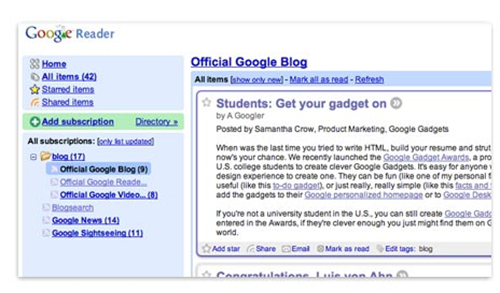 Google Reader has to be most widely used RSS reader and probably does not need any introduction. It's really simple and fast with a focus on the content. It's supported by almost all RSS feed generators. You need to have a Google Account to use it.

iGoogle is a lot more then just an RSS reader, it's more like your personal home page. You can add and delete boxes with a click of the mouse. It's really more like your online widget box with Weather, News, Sports and Entertainment widgets. Again, Google Account is needed to use it. 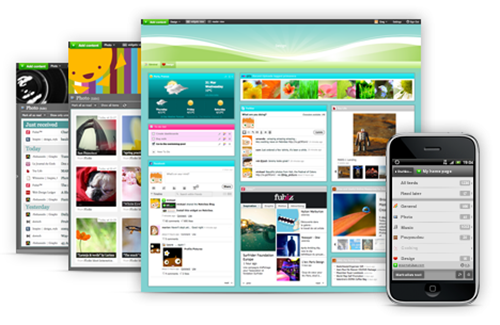 The idea behind Netvibes is the same as iGoogle, it creates a personal Dashboard with popular feeds you've subscribed. It's easy to remove the feeds, add new ones, organize and read them. It supports almost every browser.

PageFlakes is also a personalized RSS feed reader as well as a customizable widget page. Besides the standard features, you can also sync your Facebook feeds. 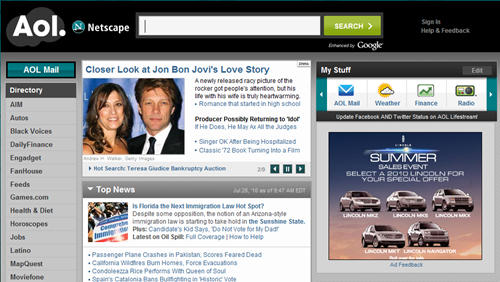 For those who have been using AOL or NetScape for ages, this is probably their one-stop destination on the web. Just like iGoogle, it also supports customizable widget boxes including a complete RSS reader. Almost all major browsers including Firefox, Safari, Opera and IE are supported. 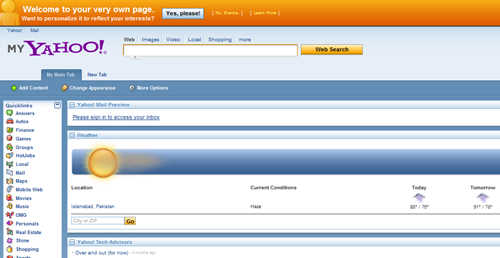 For those who are still loyal to Yahoo! This has to be their homepage and RSS reader of choice. Sarcasm apart, it sports an impressive feature set comparable to Netvibes and iGoogle. It requires a Yahoo! Account. 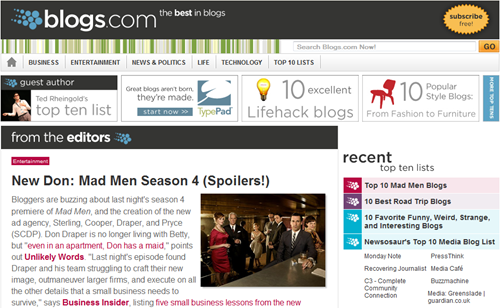 Blogs.com is not exactly an RSS reader but an aggregator of all the famous blogs on the web. The content is mixed and includes Tech, Entertainment and Finance among other categories 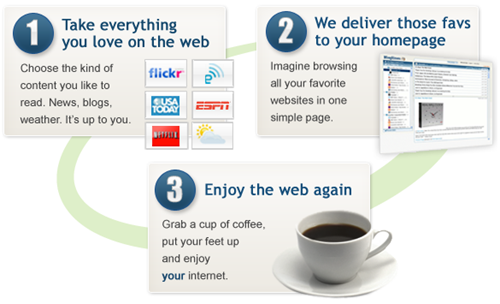 Bloglones is an aggregator as well as an RSS reader. You can sync various content formats from multiple websites like Flikr, Facebook, ESPN etc. Bloglines also has an iPhone app which can sync your subscribed feeds with your desktop. 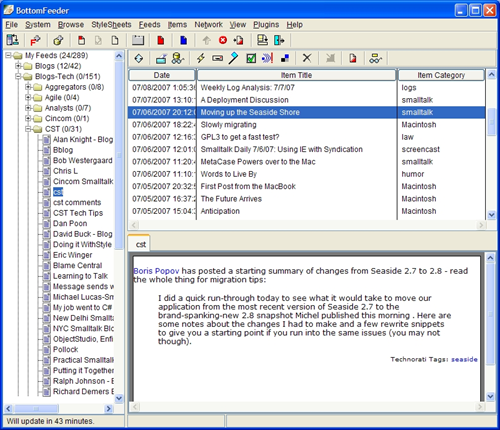 BottomFeeder is an Open Source RSS reader, feed generation tool which supports multiple formats including RSS, ATOM and XML. It uses SmallTalk and is hosted on SourceForge. Any Linux users want to try out?

This has to be the ultimate geek RSS reader with it's square UI design and Windows Explorer type category drop-down menus. You can browse through the pre-listed subscriptions or add your own. It also requires an account just like other personalized browser based RSS readers.

Fwicki is not just an RSS reader tool but includes a whole set of RSS and other content format generator and management tool chain. Besides general audience, it's popular among the SEO specialists for it's RSS customization and monitoring widgets. 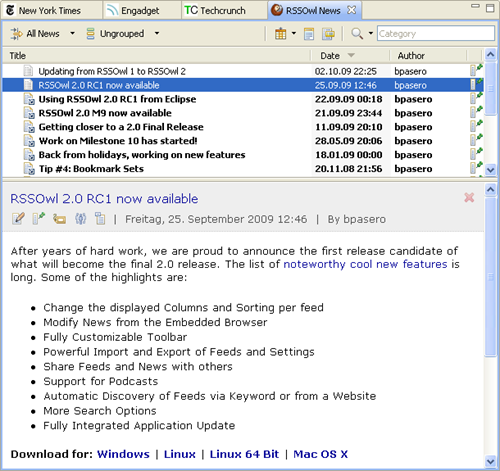 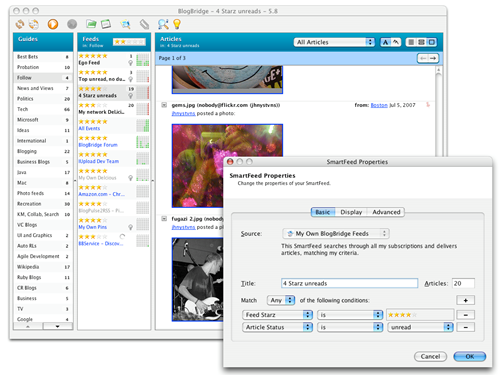 Blogridge is an impressive but slightly experimental RSS reader based on Semantic algorithms meaning that it builds it's own database behind the scenes while giving you standard RSS features. It has both Windows and Mac OS X versions. Nevertheless, worth a try. 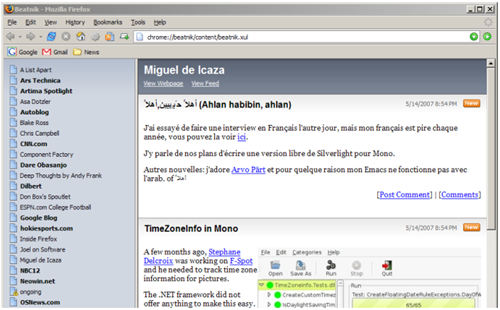 Beatnik is a Firefox Add-on for reading and managing your RSS feeds. It can automatically pick your Firefox bookmarks and index them. Simple and neat RSS plugin. 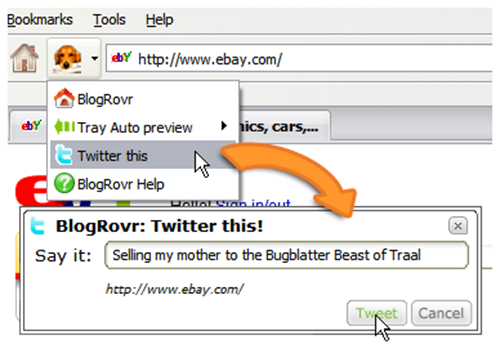 BlogRovR for Firefox is awesome. Besides reading and organizing your RSS subscriptions, you can also Tweet interesting feeds right from within it.

NewsFox is a three pane Firefox Add-On for managing and reading RSS feeds. It has a desktop like UI which makes it best suited for the Desktop audience.